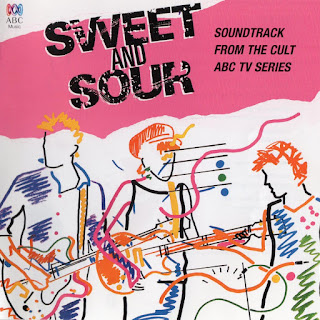 Sweet and Sour was an Australian television series that screened on the Australian Broadcasting Corporation (ABC) in 1984. It was created by Tim Gooding and Johanna Pigott and was produced internally for the ABC by Jan Chapman. The main storyline of the series followed the efforts of a fictional band, The Takeaways, to break into the Sydney music scene. "The Takeaways have so far eluded commercial success. However, negotiations are presently underway for the band to sell their story to a prominent TV station, and really clean up."

In mid-1983 Sydney a band called The Takeaways is formed. Initially it consists of Carol Howard, Martin Kabel and George Poulopoulos. Carol Howard (Tracy Mann) is an attractive vocalist and novice guitarist from Melbourne; she had pursued an acting career with little success but is now focussed on her music. Carol wrote her first song on the train to Sydney.

Martin Kabel (David Reyne) is an established, albeit unsuccessful, guitarist who wants to branch out from his current band: he would like to sing his own songs. Martin gets his chance with The Takeaways.

George Poulopoulos (Arky Michael) is more interested in playing soccer for the Combined Hellenic Travel Agents but reluctantly joins to play bass. He learns how to play at the band's first practice session; slowly he overcomes his shyness to become a confident performer.

Darrell Winters (Ric Herbert) sees a quick dollar to be made as their manager; Darrell talks the talk and tries to walk the walk. He sets out to organise their first gig: a backyard barbecue! Fortunately better gigs followed in various Sydney pubs. Their first jam sessions are in an old boot factory.

Meanwhile, Christine Yates (Sandra Lillingston) breaks into their house and rather than turn her in to the police they offer her a spot in their band. Christine's father, legendary 1960s saxophonist Shrug Yates (Martin Vaughan), taught her to 'feel' music while playing sax. Christine sings lead vocal on some songs.

Numerous Australian and New Zealand musicians and songwriters were involved in this TV series.

The title song of the series,"Sweet and Sour", was written by Sharon O'Neill, who also recorded the song in 1987 as "In Control" on her album Danced in the Fire. Deborah Conway (Do-Ré-Mi) was actor Tracy Mann's 'singing voice' and sang the hit "Sweet & Sour" (# 10 Australian national singles chart). The song's lyrics relate to self-empowerment in the face of life's vagaries: "Life can be sweet and sour, But I am in control. It can chill me to the bone, Give me wings to fly on my own."

Australian band GANGgajang were formed as a direct result of four of their members involvement as musicians/songwriters for this show: Chris Bailey, Graham Bidstrup, Mark Callaghan and Kay Bee.

Cameo appearances from other Australian musicians include, The Johnnys playing Slip Slap Fishin' and Rebel Yell live in Episode 3 and Richard Clapton playing acoustic in the street in Episode 6. Kirk Pengilly from INXS appeared in Episode 7 and Chrissie Amphlett from the Divinyls popped up in Episode 8.

Email ThisBlogThis!Share to TwitterShare to FacebookShare to Pinterest
Labels: Takeaways