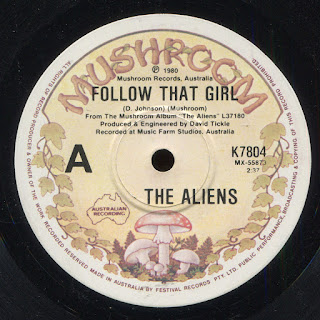 The Aliens were an Australian new wave band which formed in April 1978. They were one of the first local bands of the late 1970s to adopt a "uniform" of "black clothes and skinny, white ties". Two of their singles, "Confrontation" AUS No. 36 and "Follow that Girl" AUS No. 48, appeared on the Kent Music Report Singles Chart top 50. Australian musicologist, Ian McFarlane, noted their "sound embraced guitar-oriented pop rock with the emphasis on 1960s melodies".
Posted by Deutros at 18:11

Email ThisBlogThis!Share to TwitterShare to FacebookShare to Pinterest
Labels: Aliens