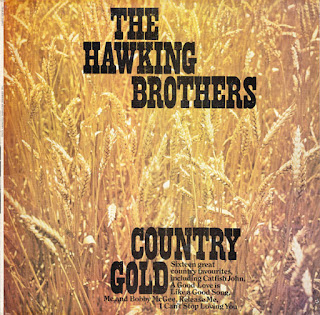 The Hawking Brothers, were an Australian country music band, formed in 1955 and disbanded in 1985. They comprised brothers Russell (1931–1976) and Alan (1933–1988). After originally recording with Regal Zonophone Records, they went on to record a number of albums with RCA Records. When it comes to winning awards, The Hawking Brothers have been very successful, winning 6 Golden Guitars. They played at the Grand Ole Opry in 1975. In 1989 The Hawking Brothers were inducted into the Australian Roll of Renown.

1940’s Alan, Russell and Barry went along to the newly formed Hillbilly Club in Brunswick.This is where they got their basic training.Alan worked as a cabinetmaker, so he made his first guitar which led to a guitar making hobby.Later he joined the well known fretted instrument maker in Melbourne, “Maton” he stayed 15 years until he became a professional musician in the 70’s.

1950’s Alan and Russell joined the “Trailblazers” a Melbourne country music concert troupe, working in radio, touring and doing live concerts in and around Victoria where he met his future wife Diane.Alan and Russell started as a duo Alan on lead and Rus on rhythm guitar featuring their two voices Alan is a multi-instrumentalist. They then formed the band which turned professional in 1970.

1955 The Hawking Brothers as a duo record their first 78rpm Regal Zonophone disc. “My Darling Daisy”.Since then almost 30 more recordings in the Hawking Brothers name for W & G, Parlophone”, “Fable”, “Planet”, “Crest”, “Columbia” and “RCA”. 1956 Alan and Diane marry.They later have four children.1960 – Appeared on the television program “New Faces”, winning their heat and the final.Recorded for Ron Tudor on his new label, Fable, with a backing group called The Wildwoods which consisted of George Xanthos on pedal steel, Gary Newton on bass and Joe Attard on drums. They eventually became The Hawking Brothers Band.

1980 Won Best Country Band FEIP. As The Hawking Brothers they toured with Charlie Pride.After numerous changes to the band line-up Alan decides to goes solo. – He performs with the help of his long time friends “Country Ltd.” Records with RCA a single “Just For Today” Releases album of the same name. He received two FEIP Awards for Best Male plus Most Popular.1983 Golden Guitar for “Best Instrumental” – “Back to Those Rolling Plains”. 1985 Golden Guitar for Instrumental of the Year with “Gospel Train” 1988 Alan Hawking passed away on 19th September. 1989 Inducted into the “Roll of Renown” in Tamworth. Thanks to Mustang
Posted by Deutros at 16:09