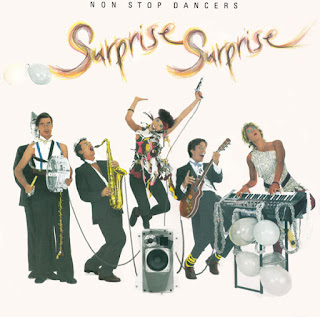 I won this back in 1984 when 2SM was king of the airwaves if you were the right number caller you would win 10 albums that were on 2SM's rotation at the time must have won a couple of hundred. Another album that I have never heard until now so that means I've owned it for all those years without a listen and I must admit I didn't mind it.
Formed in Newcastle then relocated to Sydney They trans-versed a wide range of styles from Ska, pop, reggae and swing. The single Shake this City was released October 1984 and reached No. 44 on the Australian charts and got to No. 22 in Sydney.

As a bonus I've included 3 live tracks the only info I have is 1986 Revesby, Sydney so maybe the Worker's Club.Formed in 1983 Style

Sydney dance outfit Non Stop Dancers played an energetic blend of pop, funk and soul. Larry Van Kriedt had a background of some note: born in San Francisco, his father was a renowned jazz sax player; he was also the original bass player for the nascent AC/DC. He formed Non Stop Dancers with his brother Brett following the break-up of his previous band, The Eighty Eights.

Non Stop Dancers issued The Independent Single (`Only One'/`Blow by Blow') in May 1984 before signing to EMI. The album Surprise Surprise (December 1984) produced three energetic singles, `Shake this City'/`Spellbound' (October), `Mobbing Me'/`Too Young to Die' (March 1985) and `Dancing'/`Armadillo Rumba' (June). `Shake this City' peaked at #22 in hometown Sydney during November. The band issued one more single, `Lost and Found'/`Strive' (August 1986), before breaking up. Larry Van Kriedt concentrated on session work, and then in the early 1990s teamed up with Def FX as a hidden fifth member. He co-wrote much of the band's early material.
Posted by Deutros at 07:39