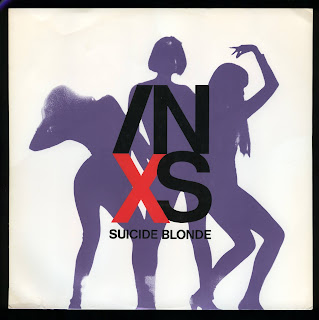 "Suicide Blonde" was written by Michael Hutchence and Andrew Farriss of the group INXS, after the band had gotten back together after a year-long sabbatical in 1989. The song's title originates from the night Hutchence and then-girlfriend Kylie Minogue attended the debut of the 1989 romantic drama film The Delinquents, which stars Minogue. For the premiere, she wore a blonde wig whose colour she called "suicide blonde".

The recording of "Suicide Blonde" showed some new and older influences on INXS. Jon Farriss's drums show the influence of dance music especially the acid house sounds popular in the UK. Similarly, the blues harp intro on the track, performed by Charlie Musselwhite, was sampled rather than recorded live.

The track was released in September 1990 throughout the world. In the United States the track reached a peak of number nine on the Billboard Hot 100, and it topped both the Album Rock Tracks and Modern Rock Tracks charts. A dance remix of the track received wide airplay on US top-forty stations, allowing it to reach the top 10 on the Hot Dance Club Play chart. On the UK Singles Chart the single reached a peak of number 11, while on the Australian Singles Chart it reached number two. In Canada and New Zealand, "Suicide Blonde" reached number one for two and three weeks respectively.

Email ThisBlogThis!Share to TwitterShare to FacebookShare to Pinterest
Labels: INXS